1. take the boat to the marker on the map (north of the white bay)
2. examine the pillar of light to dive through the water. you will end up in the MEDACHATTO REGION
3. turn south to reach PUCHALAO VILLAGE
4. go towards the ruins until you meet a young girl who is searching for her parents
5. enter the ruins
6. after a discusion with some angry villagers, leave the ruins
7. head to the village plaza. a stranger will start a conversation and hint you towards the inn
8. stay the night at the inn and return to the ruins afterwards
9. on your way, MEL will appear again. follow her inside the ruins
10. after the strange events in the ruins, follow the path until you reach a stone with something engraved on it
11. leave the mysterious place via the rift
12. return to the village plaza to tell everyone the truth about the fresco
13. after the enemy is revealed, head back to the fresco
14. the way that was blocked during your first visit, is now open. follow it and reach the end of the area
15. defeat BOSS and learn more about the ancient kingdom PUCHATTO
16. aquire the MAGIC KEY
17. travel to BANDERFON RUINS. using the MAGIC KEY you can enter the treasure room. inside one of the chests you will find the PURPLE ORB

with ROMIA's harp, the party manages to find and cross another underwater passage. they emerge at the MEDACHATTO REGION. after looking around for a bit, they stumble upon a small village called PUCHALAO.

ROU explains that this place was built on the remains of an old kingdom and that it is somehow connected to URNOGA. the ruins on the back of PUCHALAO should be worth a visit.

on the way, they run into a young girl named MEL who is searching for her mother and father.

the group does travel on, but not without promising MEL to look out for her partents on the way.

once inside the ruins, they are met by a beautiful fresco. it portraits a smiling woman that is wearing the legendary MAGIC KEY as a necklace. she is surrounded by a group of people, who seem to praise her. before TORTE and his friends can examine the artwork further, some angry villagers enter the place. the group decides to leave and look for MEL again - but to no avail.

instead, they run into what seems to be the only friendly person living in PUCHALAO. after a nice conversation and a relaxing night at the hostel, it's back to the ruins again.

when they encounter MEL again, she runs down the stairs and inside the ruins. but once the party arrives there, the little girl is nowhere to be found. then, they notice something strange:

the fresco has somehow changed. compared to what they saw the day before, there are now more people in it...and they look disturbingly similar to the angry mob that made them leave the ruins...

suddenly, a frightening sound echoes through the halls - and a moment later, the party is teleported to an unknown world. from the looks of it, they seem to be inside the fresco.

the group encounters the missing villagers and follows them. but when they witness a giant plant absobing the mob, they run away as fast as possible.

while trying to find a way out of this realm, they stumble across a mysterious stone that has something engraved on it.

"i ran into this place by accident. what once stood here was a great kingdom that fell many years ago: a kingdom by the name of PUCHATTO.

then, i found something unusual: a magnificent fresco. with it's beauty i could get lots of people to come here and eventually settle down.

this, however, was a huge mistake...

the fresco is cursed. the demon that is inhabiting it, absorbs human life power.

and it uses the shape of a young woman to lure them in..."

the group is able to find a rift that grants them access to the outside world again, and as soon as they arrive, they rush to the plaza in order to warn the people of PUCHALAO about the fresco. it is there, that MEL reveals her true nature to them.

she challenges the group, invites them to come back to her world - and the party answers the call.

TORTE and his friends return to the world inside the fresco and fight their way through it, until reaching MEL.

or better... MELTOA. this is the true name of the demon they have to face... 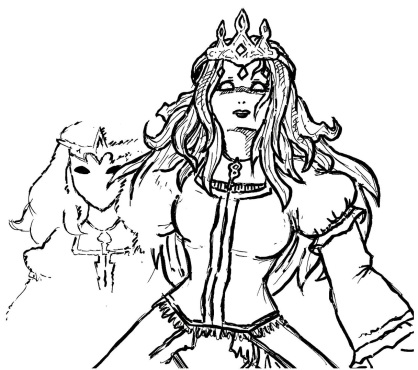 after the fight, MELTOA talks about her creator, URNOGA. and for the first time the party is able to get a hint on what their enemy is after…

URNOGA is responsible for the destruction of the ancient kingdom PUCHATTO as well as the cursed fresco. what he does, he does for one thing only: to find the power of eternal life.

MELTOA vanishes into thin air and leaves behind the MAGIC KEY...

with the village of PUCHALAO saved, the group continues their journey. the MAGIC KEY should allow them to open many doors that were previously unavailable.

guided by ROU they return to the BANDERFON RUINS. BANDERFON, just as ancient PUCHATTO, fell due to the evil deeds of URNOGA - and ROU fears that the exact same thing is happening to DELCADAR right now…

inside the fallen city's treasure chamber, the party finds the PURPLE ORB.

one step closer to the tree and to the truth.

whatever exactly URNOGA is planning - TORTE has no doubt about one thing: he must be stopped.