1. enter SAMADHI KINGDOM and head to the castle
2. after talking to the king, visit prince PHARIS in his room
3. during the night, meet up with PHARIS at the circus
4. go to the RACEHOUSE and enter the PHARIS CUP
5. return to the throne room where another problem for the prince arises
6. go to PHARIS' room to, once again, be asked for help
7. leave SAMADHI KINGDOM and get a guest for your party while doing so
8. pass the checkpoint and cross the BAKLAVA SAND HILLS
9. meet up with the prince and his soldiers in the north-eastern edge of the desert
10. confront the giant beast
11. return to SAMADHI KINGDOM 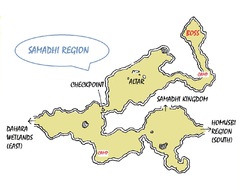 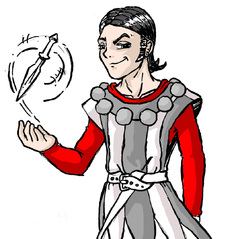 at SAMADHI CASTLE TOWN, the party notices that there are a lot of preparations under way. it seems as if some kind of festival is about to be held. there's even a circus in town.

SAMADHI is known as the kingdom of knights, famous for the horse-races that take place in the stadium… what an interesting place! after looking around for a while, the party enters the castle. hoping to be able to talk to the king about the sacred branch, TORTE and his friends visit him in the throne room. but he is too busy preparing the upcoming event. his son PRINCE PHARIS, however, is willing to listen to the group.

when they tell him about their wish to see the sacred branch of the TREE OF LIFE, he makes it clear to them that it is some kind of national treasure to the people of SAMADHI. getting the permission to see it, would take some persuasion. the prince is willing to help them talk to his father, but asks for a favor in return.

during the night, TORTE and his companions meet him at the circus tent to discuss the details. it is there that they see the fabulous artist SILVIA for the first time. he shows some impressive skill during his funny show. PRINCE PHARIS' business, meanwhile, isn't funny at all. to celebrate him becoming a knight as well as his 16th birthday, there is going to be a special race, in which PHARIS has to participate. there is just one tiny problem: PHARIS has avoided his training, using some cheap tricks - and has therefore never been on a horse. TORTE helps the prince out by becoming his body-double… so the next day, he enters the PHARIS-CUP.

the plan works and, after the race, everyone gathers inside the throne room. hopefully, now the party can get their hands on the sacred branch. just when PHARIS starts talking to his father about the matter, a soldier comes running with bad news: a giant scorpion has appeared on the BAKLAVA HILLS. to ensure the kingdom's safety, a group of knights heads out to defeat the beast.

and the king wants PHARIS to lead the attack.

one last time, the prince asks for TORTE's help. the hero agreess, but VERONICA is less then impressed by the prince's actions…

when they all meet at the city's front gate, SILVIA appears and decides to accompany the group for a while.

at the northernmost part of the desert, the great DEATH SCORPION emerges from the sands. with the prince helpless and afraid, the party takes on the giant monster.

the beast is captured and PHARIS takes it to SAMADHI, where the whole kingdom is proud of the brave prince. but when the DEATH SCORPION breaks free from it's chains, PHARIS has to admit his inability to fight.

suddenly, SILVIA appears. he reminds PHARIS of his duties on the way of becoming a true knight as well as his role as the prince of this kingdom. PHARIS gathers all his strength and faces the monster. together with SILVIA, he is able to defeat the beast.

everyone comes together at the throne room again, where PHARIS confesses to all of his lies. his father, however, is still proud of his son.

then it’s back to business: when PHARIS asks for the group to see the sacred branch, everyone is shocked to hear that the king has sold it. now TORTE and his friends have to find the merchant who bought the branch. the king sends the group west to DAHARUNE and gives them a pass for the DAHARA checkpoint. the prince also has a gift for them: a monster bell. they can use it to call on groups of monsters for training.

outside of town, SILVIA reappears. he wants to join the team. and the party could really use his boat that lies in DAHARUNE’s harbor, to chase after the merchant. SILVIA doesn't know yet of the hero and his journey. he wants to join because of his own dream: to bring happiness to the world and see many smiling faces. the group of five starts their trip to DAHARUNE.