CHAPTER 6: MAN OF THE SEA

1. pass the checkpoint and enter the DAHARA REGION
2. enter DAHARUNE CITY
3. go to the docks and learn about the upcoming contest.
4. together with KAMYU, visit the mayor in his residence in the north-eastern part of DAHARUNE
5. head to the northern part of DAHARUNE to stop the dispute and find out about a young boy's troubles
6. visit the MIRACLE WATER CAVE to get a medicine for the boy
7. return to DAHARUNE and go towards the contest-stage
8. after the events at the stage, sneak through town in order to get to KAMYU
9. defeat the boss
10. watch the party head out to sea

the party crosses the DAHARA WETLANDS until they reach DAHARUNE CITY. there, they immediately walk to the docks where SILVIA's ship should be located.

however, entering the docks is impossible at the moment. due to an upcoming event, the MAN-OF-THE-SEA-CONTEST, the harbor is closed off. the group tries to argue with the man guarding the docks, but to no avail.

although finding the sacred branch is their priority, the heroes decide to kill some time in the CITY. while SILVIA takes the girls to a shopping tour, TORTE and KAMYU visit DAHARUNE's mayor in order to talk to him about the contest. but he is rather unkind and not at all in the mood for a conversation. when he slams his door shut, SENYA suddenly appears. VERONICA seems to be in trouble...

a young boy tried to steal VERONICA’s magic cane – and once SILVIA manages to end the argument, the party learns why: his friend, the mayor's son, lost his ability to talk. the cane was supposed to heal his throat. after examining him, SENYA points out that the cane alone would not be able to cure the boy. but there might be a solution:

apparently there's a cave west of DAHARUNE in which a mysterious water source can be found. with medicine made from this miracle water, the curse that’s been placed on the lad’s throat could be lifted.

getting the water was no small feat, but the party managed to do so. back at DAHARUNE, the city is almost ready for the upcoming event. SILVIA, SENYA and VERONICA take the medicine to the mayor's son, while TORTE and KAMYU head to the stage in order to enter the contest.

unfortunately, they stumble upon a familiar enemy: HOMEROS, leading tactician of the DELCADAR army, is in town - and the moment he spots TORTE, all hell breaks loose. the famous soldier announces to DAHARUNE's citizens that TORTE is the bringer of calamity, the CHILD OF THE DEVIL. he then orders his soldiers to capture the boy. TORTE and KAMYU are able to beat quite a few, but in the end there are too many of them....

when the rest of the party arrives, they all try to escape together. but HOMEROS uses some strange dark magic and KAMYU, while protecting TORTE, is caught. with the city full of soldiers, his friends go into hiding for the time being.

KAMYU is hold captive on the stage - and HOMEROS, right by his side, calls out to TORTE. instead of giving in to HOMEROS' demands, the party decides on a clever sneak-attack. carefully they use the roofs and gondolas of DAHARUNE to get behind HOMEROS’ back - and the plan works! he is utterly confused as to how the group managed to get past his subordinates. confusion, however, doesn't stop him from drawing his swords. TORTE and his friends have to fight! 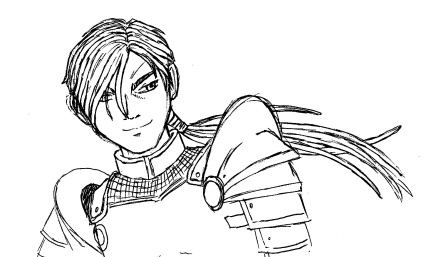 after the battle, the group is yet again surrounded by soldiers. luckily, SILVIA's retainer ALICE arrives at just the right time. everyone is able to jump on SILVIA's ship and it seems af if they have gotten away.

but just before the group can leave the harbor, another surprising thing happens. and it's not the good kind of surprise… a giant KRAKEN rises from the sea - and everyone is dazzled by the fact that HOMEROS is commanding the beast.

when their escape seems to have failed, DAHARUNE's mayor, together with a small fleet of boats, appears. they chase off the monster, while thanking TORTE and his companions for healing his son. no matter what DELCADAR chooses to call him, the people of DAHARUNE could never think of TORTE as the CHILD OF THE DEVIL. the mayor, his son and the citizens of DAHARUNE wave good-bye, while HOMEROS curses the young hero...

once DAHARUNE lies behind them, the party discusses their next move. from ALICE they hear about a rumor, stating that the merchant, who bought the sacred branch, was heading north-east… in the direction of BANDERFON. they all take a deep breath and set coarse - before them lies the vast ocean of LOTOZETACIA…