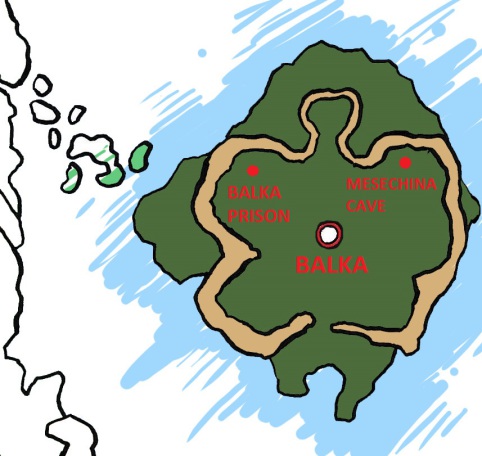 1. BALKA HARBOR: leave the harbor and head to BALKA
2. BALKA: head to the castle's front gate
3. CLAIRE SIDE: talk to everyone and leave the room to witness CLAIRE’s conversation with the queen
4. BALKA: search for the GAJUMA. he is at the train-station that is seperated from the town.
inside the only buildung that can be found there, investigate the corner behind the wall
5. BALKA: talk to YOTTSUA and follow his advice to visit JIBEL, who lives across the item shop in town
6. BALKA: talk to JIBEL, who offers help in return for a favor
7. BALKA: select party members and head out to MESECHINA CAVE
8. save HACK at MESECHINA CAVE
9. BALKA: return to JIBEL
10. enter the BALKA UNDERGROUND through the secret entrance in JIBEL’s study
11. reach CALLEGEA CASTLE and meet the queen
12. BALKA PRISON: escape the prison by solving the puzzle (BLUE, YELLOW, RED, ORANGE, GREY)
13. return to the BALKA UNDERGROUND and use the shortcut to reach the castle again
14. CALLEGEA CASTLE: follow the corridors until you reach the captured girls
15. CALLEGEA CASTLE: continue through the castle until you bump into some familiar enemies
16. CALLEGEA CASTLE: run towards the rooftop and try to save CLAIRE

at the harbor the party meets a strange woman. also, HILDA'S cards show the moon again which doesn’t seem to be a good omen...there's not much time left. VEIGUE and his friends rush towards BALKA! 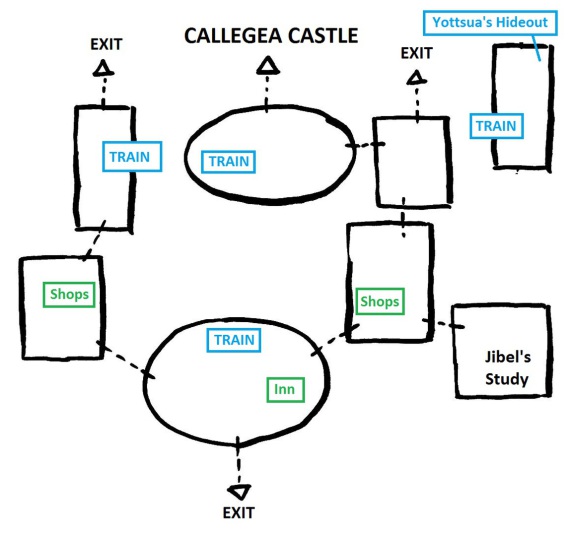 at the captial, everyone is impressed by this giant city. BALKA, the city of fog. the place where CLAIRE is held captive.

the party immediately tries to enter the castle, but due to the tight security this is no easy feat.

CLAIRE, just like SUSIE a while ago, is brought before the queen. she admires the young girls beauty, but CLAIRE tries to open AGARTE'S eyes to the fact that looks and race don't matter. the queen gets angry and when she touches CLAIRE, the strange event that happened with SUSIE happens again. CLAIRE loses consciousness...

QUEEN AGARTE talks with her right hand ZILVA. the ceremony is right around the corner. the queen wants to be reborn. a new beginning for her and for “him”...? for the whole kingdom?

damn it! what is the queen planning?...

back to VEIGUE: the heroes witness a GAJUMA running out of the castle. following EUGENE'S advice they chase after him. after a troublesome search they are able to find the young soldier, who's name is YOTTSUA. he tells the group about CLAIRE, that she apparently caused some huge commotion at the castle and that the queen said she could be saved by her...

he also gives the party a hint on how to get into the castle: a guy named JIBEL could be their way in. VEIGUE and his friends don't hesitate to visit him, althoug EUGENE isn't a fan of the idea. on the opposite side of the item shop in town, they find JIBEL'S house and ask for his help, which he is glad to give.

however, he himself asks for a small favor in return: to search for his companion HACK, who went of to MESECHINA CAVERN, and hasn't returned in a while.

the cave lies north-east of BALKA and isn’t too big. the group is therfore able to find HACK quickly and, after a small fight with some demons, he returns to JIBEL.

back at JIBEL'S house, the secret entrance into the castle is revealed. through a wall in his study the party should be able to enter the BALKA UNDERGROUND.

according to JIBEL, that is the perfect way to sneak into the castle. before they can enter the underground, however, he has some comments about VEIGUE'S charm, the stone that CLAIRE once gave him. to VEIGUE'S surprise, it isn't just some old stone with sentimental values, but also a very special treasure. it's called a MOONSTONE, that changes it's colour according to the moon phases.

it is said that, once it reaches it's full glow, the ancient king will rise.

KING LADRAS, the ceremony on the DAY OF GOLDBA, the full moon, GAJUMA and HUMA. slowly the pieces of the puzzle all come together...but unfortunately, VEIGUE and his friends are still not able to connect them.

VEIGUE thanks his friends for all the help on this journey and asks for their support just a little longer. he also wishes for them to look after CLAIRE, in case something should happen to him in the upcoming fight. but none of his companions want to hear about that. they can make it. CLAIRE'S freedom is in sight and they are going to head back home save and sound...all of them.

the heroes enter the BALKA UNDERGROUND.

the route through the underground isn't too long:

pulling a lever and setting two clocks in the puzzle-room to 9 o'clock is all it takes for the party to reach the castle.

once inside, the party doesn't get too far until the bump into SALEH. soon after, the queen and ZILVA pass by and EUGENE demands to talk to her. the queen agrees and inside the

throne room VEIGUE and his friends finally get a little insight in what she is planning.

AGARTE refers to an old legend:

long ago the DIVINE KING reigned togehter with the 6 SAINTS, each of them possessing a special power. when a fight between the king and the saints broke out, the king was imprisoned inside the earth.

to ressurect him and use his power...this is QUEEN AGARTE'S goal. her kingdom is on the path of ruin and she - with her FORCE of the moon - is the only one who can control the secret power of the DIVINE KING and prevent CALLEGEA'S downfall.

what all of this has to do with CLAIRE, she doesn't tell. only that CLAIRE shall not come to harm. the queen promises to return her once the ceremony is over.

"SHE WON'T BE CHANGED. BECAUSE SHE IS ABLE TO CLOSE HER EYES"...

that is all the information the party is able to get. then they are brought down by AGARTE'S FORCE and soon after, a group of soldiers attacks. the heroes manage to drive them off, but more are on their way. in the end, the group faces defeat and ends up in BALKA PRISON.

inside the cells of BALKA PRISON the party is desperate...

but then a surprising group of visitors appears. the DARK WINGS appear... or whatever name they will decide on, in the end.

to pay their debt from CLIMBER'S CAVERN the trio frees VEIGUE and even gives him a hint on how to solve the puzzle. the note says:

RED: on it’s left side: YELLOW

GRAY: on it’s left side: ORANGE

YELLOW: nowhere left of it: GRAY

BLUE: nowhere left of it is: YELLOW

SOLUTION:
switch the orbs around to get them in the following order:

the party is able to escape and after rescuing a couple of soldieres, who where sent to jail for questioning the ROYAL SHIELD, they immediatley return to BALKA.  ther, using the secret UNDERGROUND, they reach the castle again. 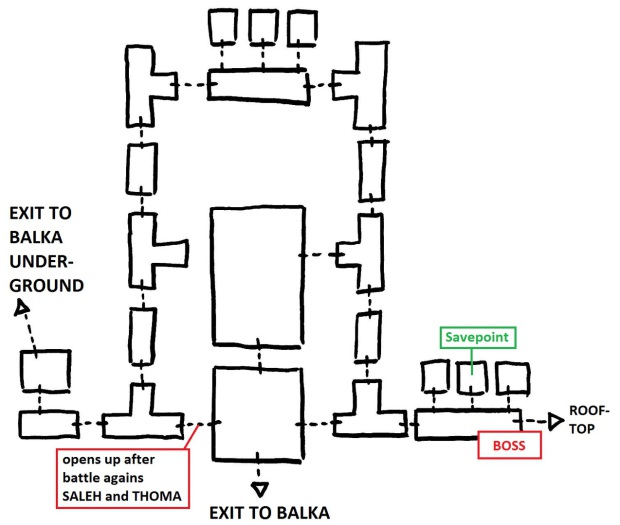 through countless corridors, past countless soldiers, the journey takes them to a group of rooms. it is there that they find the missing girls. all except CLAIRE.

NATSU, the soldier VEIGUE freed in BALKA PRISON, assists in getting the girls out of the castle, so that the heroes can concentrate on finding her captured friend.

some tough encounters later the heroes reach the corridor that leads to the roof. this is where the ritual is going to be conducted. two well known opponents appear and try to prevent the party from advancing: THOMA and SALEH.

it’s time to settle the score! 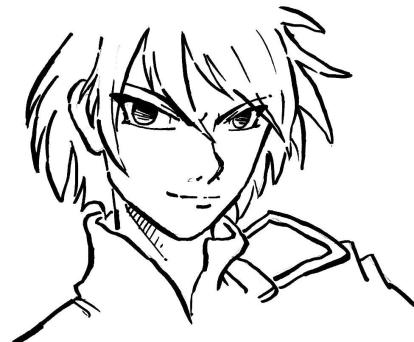 after a long and hard fight, THOMA and SALEH are beaten. VEIGUE and his friends continue to run towards the roof of CALLEGEA CASTLE, when two more roadblocks enter the stage: WALT and MILITSA.

MAO, EUGENE, ANNIE, TYTREE and HILDA try to hold off the enemies, giving VEIGUE a chance to rush past them.

the ritual is going to start any minute now. VEIGUE can already hear QUEEN AGARTE calling out for the DIVINE KING…it can’t be too late. CLAIRE!!!

the events unfolding before VEIGUE’s eyes are unbelievable. the queen takes CLAIRE by the hand and together with her enters the light of the full moon. and then something goes terribly wrong. instead of AGARTE gaining power, she and CLAIRE disappear.

with them gone, someone else rises. it might not have happened the way AGARTE had it in mind, but the imprioned king rises:

"I AM THE DIVINE BEAST KING GEYORKIAS.”

by now VEIGUE’s friends are at his side again. they, too, can’t believe what they are witnessing. the DIVINE KING isn’t, as they all thought, a person – but a giant beast. and his mission is to bring peace to this world, which sounds kind of admirable. his method, however, involves eradicating all the HUMA from this world.

no matter how god-like this creature seems, it needs to be stopped!!!

GEYORKIAS has a giant amount of HP and very strong attacks. he constantly switches between two positions. in the air he is much less dangerous and this time should be used to heal. on the ground he can dish out some serious damage to your party. always defend against his beam-attacks and try to take as much of his HP as possibl eafterwards. you can hit him with most attacks  when he is in the air, but it’s a lot harder to do and – to say it once again – this time SHOULD be used for healing. good luck! 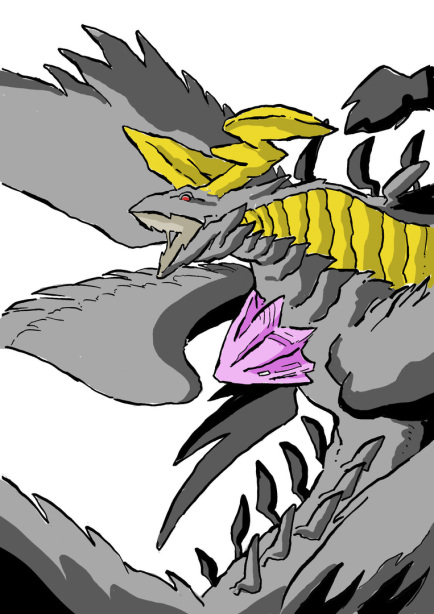