1. travel through SHIKESVIA SNOWFIELD and leave it via the south-eastern exit
2. climb the ZELANDA MOUNTAINS by riding the robot-enemies
3. enter the HOLY GROUND RAMUDA
4. go to the plaza to see a new life being greeted into this world
5. after getting to know the high pries, go to RAMUDA TEMPLE
6. learn about the first hero and his story, as well as VERONICA’s and SENYA’s destiny
7. exit the temple through the back-door and march through the valley
8. you will arrive at the FOREST OF BEGINNINGS. follow the road and climb upwards until the party decides to rest
9. after a relaxing night, continue the journey. finally, you will reach the altar
10. after the rainbow bridge appears, use it to get to the TREE OF LIFE
11. climb the roots of the tree and reach it’s center

after a long journey, the party reaches the holy ground RAMUDA. the local high priest is relieved to see SENYA and VERONICA save, and even more amazed to learn that they have found the reincarnated hero TORTE.

inside his TEMPLE he tells the story of LOTIU, the first hero. when the wicked god descended, he robbed the TREE OF LIFE of it’s soul. the tree then chose a hero. but that hero wasn’t alone. together with his companions, he confronted the evil mastermind and struck it down. after their victory, a giant bright star appeared, heading towards the sky. it was called the HERO’S STAR.

the high priest then concentrates on one of LOTIUS’ companions: the sage SENKA.

while the group is well aware that TORTE is the reincarnated soul of LOTIU himself, what most of them didn’t know: VERONICA and SENYA share the soul of sage SENKA.

with the 6 ORBS in hand and the high priest’s best wishes, the group travels to the FOREST OF BEGINNINGS. inside the forest lies the ancient altar that TORTE had seen in his vision. after an exhausting march, they are able to reach this holy place. and just as they had hoped: the 6 orbs begin to float, each one searching it’s pedestal. in a beautiful spectacle, the rainbow road appears and leads the party to the sacred TREE OF LIFE.

…finally…the great tree… TORTE and his friends move on.

once the party arrives at the center of the tree, a strange mass of roots lies before them. inside of it: a giant ball of light. this is the soul of the TREE OF LIFE. the source of all living beings in LOTOZETACIA.

when SILVIA tries touching the light, he hurts himself. as ROU explains – only the hero is allowed to come in contact with the tree’s soul. deep inside the glowing mass, TORTE notices a weapon. a sword.

one deep breath and he raises his hand, the birthmark of the hero glowing brightly.

and it works! the soul of the tree grants him access to this powerful weapon. with it the party will be able to strike down the power of darkness!

... right before TORTE can get his hands on the sword, he is hit by a black sphere…!

HOMEROS laughs, standing right behind them.

he mows down the group and walks towards the LIFE TREE’s soul.

then, more guest appear on stage:

general GREIG, together with the king of DELCADAR, demands HOMEROS to stop what he is doing. GREIG wants to make sure his king understands that the power HOMEROS is using, isn’t just some strong kind of magic. it’s the power of darkness.

but the time has come for GREIG to learn what the party has already suspected: GREIG is struck down by the king, who himself falls to his knees, when a strange dark cloud is released from his body. the demon that emerges from this cloud, faces HOMEROS and thanks him for the good work.

in the end, TORTE’s enemy has shown his face:

URNOGA, the great evil that threatens the world, is now standing right in front of them. he grabs TORTE and with one violent strike, sucks the hero’s power out of him.

with that power, URNOGA is able to retrieve the HERO’S BLADE, turning it into his very own DEMON BLADE.

but he isn’t finished just yet... the terrible demon now aims for the soul of the TREE OF LIFE.

one hit, and the whole thing bursts, energy swirling around everywhere. URNOGA absorbs it, taints it and grows stronger by the minute – his appearance turning more and more vicious.

he has become the DEMON KING…

one moment later, the source of life itself, the sacred tree of LOTOZETACIA, witheres and dies.

when the floating island crashes to earth, all that is left is darkness… 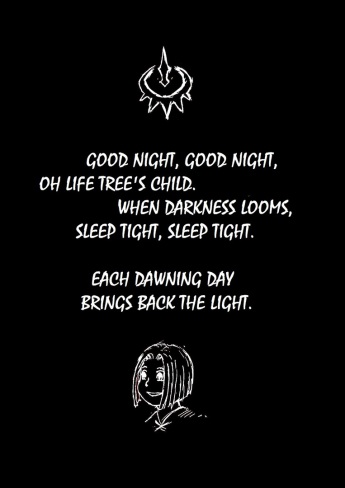