1. go to SOLITCO and visit the residence in the eastern part of town
2. talk to the butler
3. get back to the boat and go to the seagate outside of SOLTICO
4. enter the outer seas until a mysterious fog emerges
5. you will end up on the WHITE BAY. examine the water and get to know ROMIA
6. head to NAGIMURA VILLAGE which lies far to the east of your current location.
7. during the day, witness KINAI's mother telling a story to the children infront of the church
8. talk to KINAIS's mother to learn about the dangerous beast that roams the sea west of NAGIMURA
9. head to the cliffs and obtain the cannon from one of the villagers
10. return to sea and travel to the west until you meet up with the fishermen
11. defeat the BOSS
12. back at NAGIMURA, go towards the docks until you are finally able to find KINAI. listen to his story
13. follow KINAI to the shores north of the village (through the church)
14. at the hut KINAI will give the group an important item. take it back to ROMIA at the WHITE BAY
15. take ROMIA to NAGIMURA
16. go to KINAI's house and escort him to ROMIA
17. enter the hut and find out the truth about the fisherman's curse
18. return to the WHITE BAY and get the HARP from the chest
19. in the center of the inner sea, examine the pillar of light and enter the seafolk's kingdom
20. go to the palace and talk to the queen to receive the GREEN ORB

when the group arrives in town, SILVIA starts acting strange and decides to wait for them outside.

at the residence of ROU's aquaintance JEGO, they learn that he isn't available right now. however, the matter in which they need help - opening the SOLTICO seagate - is something the butler could assist in.

the party returns to the ship and heads to the gate. everyone waves goodbye to the friendly butler, as the group enters the canal to the outer seas.

one thing howerver, is kind of strange: JEGO’s butler is able to see SILVIA from a distance. and it seems as if he recognizes TORTE's unusual friend...

soon after reaching the huge ocean of LOTOZETACIA, a thick mist emerges. a moment later, the party finds itself at a mysterious inlet: the WHITE BAY.

what they encounter here, takes everyone by surprise: a mermaid called ROMIA jumps out of the water. she tells the group abut her home, the seafolk kingdom MURIA, as well as their national treasure. hoping that this treasure could be another ORB, TORTE wants to visit this kingdom as soon as possible.

but first, ROMIA is in need of assistance: for quite some time, she’s been waiting for a man who promised to return to and marry her. KINAI is his name, and to find out more about him, the party heads east to the fisher village NAGIMURA.

in NAGIMURA they hear about KINAI, but aren't able to locate him. instead they meet his mother in front of the church. she is telling the children of the village a rather scary tale:

there once was a brave fisherman. he was promised to the mayor's daughter who loved him very much.

one day, he went out to sea, when his boat got into a terrible storm.

the fisherman fell into the sea, certain that his live was over.

suddenly, a beautiful mermaid appeared. she held him close whispering in his ear:

"if you want to live, give me your soul."

meanwhile, back in his village, his friends and family were sure the fisherman had died out on the sea.

when he finally returned, everyone was so relieved. they where so happy, it took them a while to realize:

the fisherman had changed.

he talked a lot about the seafolk, claiming that he belonged to them. he wanted back to the sea. all of this made his wife-to-be extremely sad - and her father, the mayor, furious.

before the fisherman could depart from the village, his boat went down in flames.

and the fisherman himself? he ended up in the village's prison...

...never to leave the coast again.

speaking to the old woman, the party learns that everyone in NAGIMURA is occupied right now. a giant kraken has appeared in the waters west of the village. TORTE and his friends grab themselves a cannon and follow the other villagers on their way to defeat the dangerous monster.

none of the heroes is too surprised to find out that the dangerous KRAKEN is the same one they encountered in DAHARUNE. and now it's finally time for revenge: 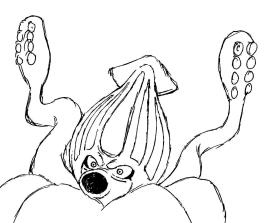 back at NAGIMURA, the victory is celebrated. while the villagers are having a feast, TORTE decides to search for KINAI. standing at the docks, the fisherman looks out over the sea… when the party tells him about ROMIA's request, the young man replies that his name might be KINAI, but that the man, they are searching for, isn’t him. it's his grandfather.

then, he tells the the second part of NAGIMURA’s most famous tale:

after 10 years of imprisonment, the fisherman managed to escape.

then, life went on. DONATELLA, the woman who should have become his wife, eventually married another man and had a child with him. peace returned to the village and the fisherman’s curse was almost forgotten.

one day, DONATELLA's husband went to sea. just like the fisherman, many years ago, he got into a storm. but unlike him, he never returned.

DONATELLA was desperate to find out what happened to her husband and disappeared.

the people of the village started to suspect that all of this had something to do with the fisherman. they tracked him down in a small hut at the coast.

when they entered the building, what they found wasn't what they expected: there he was. the fisherman. with a baby in his arms.

KINAI gets angry when the group asks him if that story means that his mother is the child of a mermaid. he tells them about the village peoples’ rumors and makes it clear that no one knows how much of this story is actually true. he doesn’t want to believe that he could have inherited the fisherman’s curse and wants the party to leave him alone…

but with the right questions the group is eventually able to get something else out of him… KINAI leads the party to a small hut outside of the village. this is where his grandfather had lived and died. he hands them a vail, asking them to take it to the mermaid and to tell her about his grandfather's death.

TORTE and his friends do exactly that. they return to the white bay and report everything to ROMIA. but the mermaid doesn't want to believe it. not even taking her to KINAI's grave in NAGIMURA is enough to persuade her. but when the young KINAI appears and confirms his grandfather’s death, ROMIA finally accepts the truth. after a heartwarming moment with the boy who seems so much like her fiance, the mermaid disappears into the sea's foam.

nothing about ROMIA seemed wicked. but all those years, KINAI had heard these stories about the mermaid putting a curse on his grandfather… it doesn’t add up.

he returns to  the hut, with the party right behind him.

inside they see something quite beautiful: a painting made by KINAI's grandfather. it pictures a mermaid that looks exactly like ROMIA. she wears the vail on her head.

but there is something else. behind the painting, the group discovers a letter. this is how they learn the truth about the terrible "curse"...

when KINAI's grandfather escaped to the hut, he started making plans to return to his dear ROMIA. but then, everything changed. one night, he saw a figure standing at the cliffs...

as he drew closer, he realized that this was DONATELLA, together with her little baby.

all the sadness, all the loss...DONATELLA couldn't find the will to live anymore. and before KINAI's grandfather could grasp what she was saying, his former wife-to-be jumped off the cliffs. he did everything in his power to save her, but to no avail. what he could do, however, was to save the baby out of the ocean.

- and this child was now all alone in the world.

"i'm sorry, ROMIA. i can’t keep my promise. there is someone here who needs me."

since a mermaid’s lifespan is much longer than that of a human, KINAI lived his whole live while ROMA was waiting… until he eventually died as an old man in this hut. always having cared for the little girl he had rescued.

and that’s it. no matter how many people keep telling a certain story – that doesn’t make it the truth.

there was no curse. no crazy grandfather.

just a man, deeply in love, who sacrificed his own happiness, to take care of a little girl.

with a heavy heart, TORTE and his friends leave NAGIMURA and KINAI behind.

having learned a little bit more about the world, they are trying to save, the party heads back to the WHITE BAY.

there they find ROMIA's harp that grants them access to the seafolk's kingdom: MURIA.

the queen has her eyes and ears everywhere and knows of the events regarding ROMIA. she very much appriciates what TORTE has done for her and grants him the seafolk’s GREEN ORB.