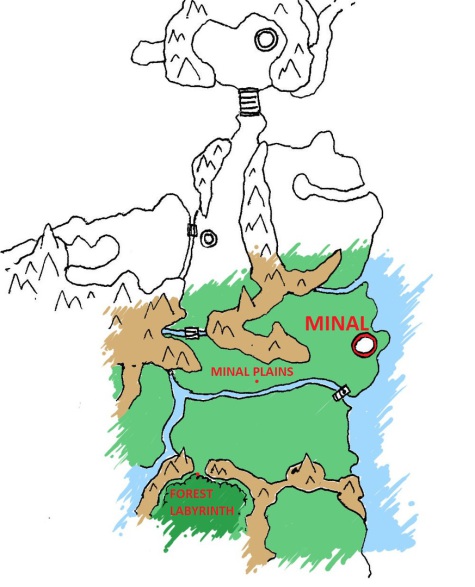 1. head towards MINAL, you will end up on the MINAL PLAINS
2. MINAL PLAINS: head east until VEIGUE creates an ice pillar
3. MINAL PLAINS: keep going east to discover that the party is walking in circles
4. MINAL PLAINS: eventually you can use MAO's power on the pillar and, after a short fight, continue to MINAL
5. reach the harbor town MINAL
6. MINAL: talk to DR. CURIA
7. MINAL: speak to the soldiers at the harbor
8. MINAL: head back to the town square to learn about the two different options of getting on a ship
9. MINAL: choose one of the two options - the result will be the same no matter what you choose: no ship.
10. MINAL: talk to DR. CURIA again and witness the unfortunate encounter between ANNIE and MISHA
11. MINAL: search for MISHA in town - he's at the cabbage-field
12. MINAL: head back to the town's entrance and follow DR. CURIA to the coast, where MISHA can be saved.
13. MINAL: ANNIE will make a deal with EUGENE and become a member of your party
14. next goal: the town PETNADJANKA, south-west of MINAL
15. you will come across the FOREST LABYRINTH - enter it and follow the road to the west until ANNIE and MAO open an alternate route.
16. travel through the FOREST LABYRINTH

the weather is out of control and the group is stuck going in circles on the plains. just when they find out that the reason for this phenomenon is a FORCE-user, the person responsible shows up.

it's a young woman who introduces herself as ANNIE BARRS. her goal: to kill the GAJUMA that killed her father. together with a band of hired men she attacks EUGENE... 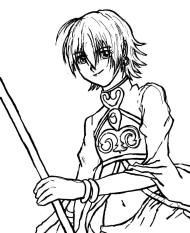 focus on ANNIE first. she has the lowest HP and her spells can do heavy damage. once the girl is out of the picture, the rest of the enemies should be a breeze. the three mercenaries have 3000 HP each.

after her defeat, ANNIE is desperate. her father, DOCTOR BARRS, was all the family she had and his closest friend, EUGENE, took him from her. the girl starts crying and screams at him.

the GAJUMA does not try to apologize. he wants ANNIE to not give up, keep on living until his mission is completed. after that, he promises, his life will be in her hand.

since she used too much of her FORCE, ANNIE collapses. a doctor in MINAL should be able to get her back in shape, so EUGENE picks up ANNIE and the party continues their trip to the harbor town. 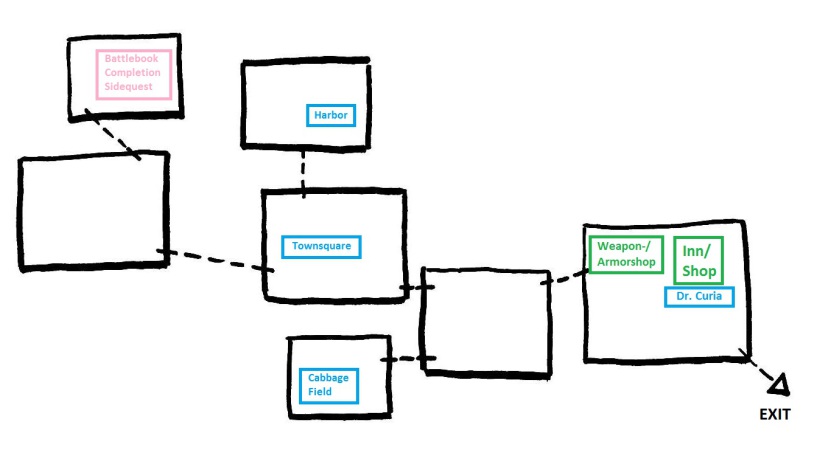 in MINAL the party bumps right into the local doctor's apprentice, MISHA. they take the girl to DR. CURIA and head to the harbor soon after. there they learn that it is closed for all ships except those of the royal army. thinking that this must be SALEH's and THOMA's doing, the party explores some alternative ways to get their hands on a ship, but they are unsuccessful. when DR. CURIA calls the group back to ANNIE, they witness an unfortunate encounter between her and MISHA:

because of what EUGENE did to her father, ANNIE despises GAJUMA and, with her hateful attitude, scares little MISHA away. VEIGUE and the others search for him in town, but he runs away soon after they find him. together with DR. CURIA they are able to locate him again at the coast outside of MINAL. after a short battle against some VIRUSES, MISHA calms down and can be brought home save.

soon afterwards, the party learns that SALEH and THOMA are not the ones responsible for closing off the harbor, but the CALLEGEA military. as it turns out the ROYAL SHILED is just a fraction of CALLEGEA’s forces and there seems to be a struggle among them. furthermore, a message from CLAIRE, given to them by DR. CURIA, states "don't take the boat!"

…it seems as if the FOUR STARS are travelling across the country by foot, in order to get their hands on more girls...

what is going on in BALKA? is something about to happen there? what other reason could there be for the military to forbid sea travel towards the capital? and what about the party that has CLAIRE in custody? what exactly is their plan? at least, the heroes can stop searching for a boat now. instead they head to the city closest to their current location: PETNADJANKA, south-west of MINAL.

to uncover the truth behind her father’s death, ANNIE decides to join VEIGUE's party. she's still very much hostile towards EUGENE, but VEIGUE and MAO soon start to realize that there's a much kinder side to the girl. despite what you might think after everything that happened witch MISHA, she cares a lot about other people and, after hearing VEIGUES’s story, is very much concerned about CLAIRE. 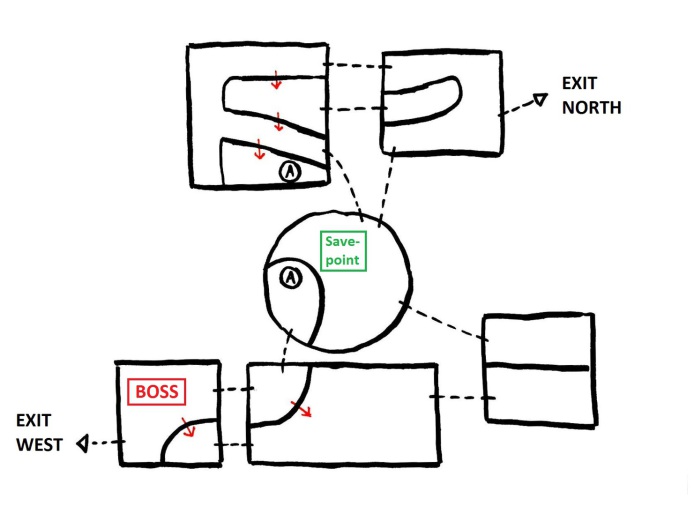 on their way to PETNADJANKA, the party comes across a mysterious forest. it is only due to ANNIE's help that they manage to get through. another VIRUS attacks just before they can leave the woods, but VEIGUE and his companions are able to deafeat the beast. 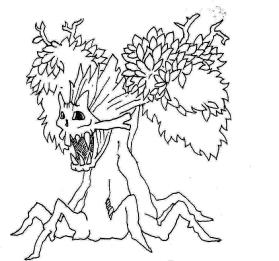