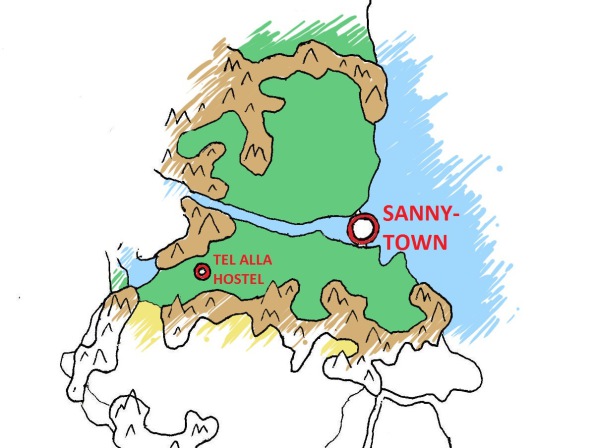 1. head to the harbor of SANNYTOWN
2. SANNYTOWN: talk to the woman at the town square about her daugter HILDA
3. visit TEL ALLA HOSTEL and fight HILDA twice
4. return to SANNYTOWN - at the inn, HILDA can get the rest she needs
5. SANNYTOWN chase MILITSA through the town until you can finally defeat her
6. SANNYTOWN: HILDA joins the party
7. find the girl MILITSA was chasing in one of the houses and listen to her story
8. return to the town square and listen to the soldier’s announcement
9. leave the town, at the exit the story will switch to CLAIRE
10. CLAIRE SIDE: talk to all the girls in order to switch back to VEIGUE 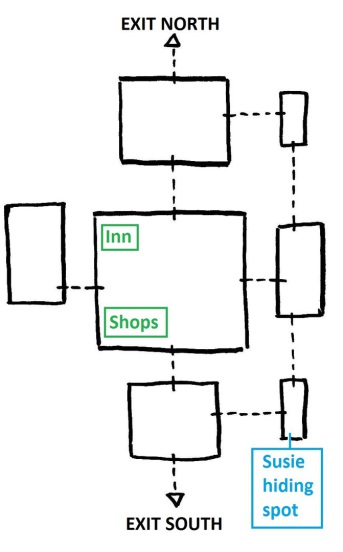 the city really is as beautiful as TYTREE promised. the group visits the harbor, but does not get a lot of information out of the soldier patrolling there.

back at the town square, they run into a desperate woman. her daughter HILDA, she claims, was taken by a bunch of soldiers. did SALEH and THOMA strike again?

the party travels to TEL ALLA HOSTEL in order to save the young girl and, hopefully, their missing friends SELENA and CLAIRE.

at the hostel, VEIGUE and his friends find nothing but an empty cottage. just when they begin to fear that they are too late again, a young woman appears. her name is HILDA.

she begs for help, claiming to have escaped SALEH and THOMA. but the whole thing turns out to be a trap. when THOMA arrives, HILDA shows her true face. she has been working for the ROYAL SHIELD all along.

in a short battle, HILDA can be brought down quickly. upon her defeat, THOMA forces HILDA to show the party her true self. under her hat, the woman hides two broken horns. a HUMA with horns? HILDA is what is called a HALF, the child of a HUMA and a GAJUMA. since this is a huge taboo in CALLEGEA, THOMA had lured HILDA in with the promise of giving her a pure body. but it was all a lie. HILDA screams in agony and attacks again, this time with all her power. 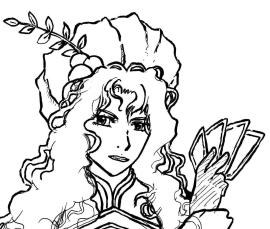 while in the first battle HILDA is accompanied by soldiers, this time she is alone. this, however, doesn’t do much to make things easier. since HILDA’s rage makes her a lot stronger, she’s impossible to stagger - just like TYTREE was. try to get away from her spells and push through.

when THOMA leaves, the party is left with a wounded HILDA. although she tried to kill them, the heroes decide to take her to SANNYTOWN in order to help her recover from the fight.

they arrive at the SANNYTOWN inn. while HILDA rests, VEIGUE and his companions discuss her situation.

being a HALF in this world is as hard a life as it can get...so they don't hold too much of a grudge against her...

unfortunately, their journey doesn't allow for a single peaceful moment. MAO detects a very strong FORCE and they all head outside where they meet MILITSA, FORCE-user of rainbow and one of the FOUR STARS. MILITSA is chasing a girl through town, and the party rushes after her. due to MILITSA's powers, however, they have no chance of stopping her.

after a number of encounters, HILDA suddendly stands by their side. MILITSA is a HALF, just as HILDA. and the two women did not only grow up together, but share the fate of getting lured into the army with the promise of a better life. HILDA tries to explain to MILITSA that there is no reason to continue fighting for the ROYAL SHIELD, but her former friend won't listen.

"YOU CAST OFF YOUR HORNS! DON'T ACT LIKE WE'RE THE SAME!" is the response. the way MILITSA sees it is that there is no place to belong to for a half, exept within the ROYAL SHIELD.

she demands that the group gets out of her way and when they oppose her, the situation escalates... 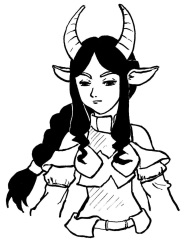 MILITSA is able to summon an infinite number of clones. concentrate on her and her alone.

when she tries to confuse you by teleporting around the battlefield, try to use the R-button and check if you are still locked on the correct enemy. since her clones have a lot less HP it should be easy to tell which one is the real deal.

after the fight, MILITSA disappears and HILDA is still very much devastated, that she could not get her friend to leave the army.

no place to belong to for a HALF? VEIGUE won't accept that idea. he and his friends offer HILDA to join their little group and while HILDA still has some doubts about it, she agrees.

next up, the party wants to find the girl MILITSA was after. she has to be somewhere around town. they start searching and are able to locate her in one of SANNYTOWN'S houses, hidden under a blanket.

the girl introduces herself as SUSIE, from the town BELSAS. together with a couple of other girls she was brought to CALLEGEA CASTLE, at the captial BALKA. she ensures that non of the girls where harmed in any way, but, unfortunately, doesn't know anything about CLAIRE or SELENA.

SUSIE was brought before the queen by a woman named ZILVA. what a strange conversation this was...the queen and SUSIE talked about beauty and AGARTE said something about her giving SUSIE her body. without knowing the reason why, SUSIE fainted, only hearing the queen and ZILVA discuss something about the plan having failed. after waking up back in her room, she was terribly afraid of what else could happen to her. so SUSIE faked an illness and used this to escape from the castle.

after SUSIE leaves, the party notices a commotion at the town square. a soldier announces the coming of the DAY OF GOLDBA. on this day - that exists to celebrate the great hero who founded CALLEGEA - queen AGARTE will have her official crowning ceremony. until then, all harbors, exept the one in BABILOGRAD, will stay closed for the public. the party fears that their captured friends are connected to this day, and hurries in the direction of BABILOGRAD when they leave SANNYTOWN, VEIGUE takes a look at the stone CLAIRE gave him and thinks about her.

meanwhile, CLAIRE, together with a bunch of girls from different towns, SELENA being one of them, is hold captive in BABILOGRAD. SALEH appears, ensuring the girls that, since they are all very special, no harm will come to them. she remembers a moment with VEIGUE. how he always protected her. VEIGUE...where could he be now. is he on his way?