CHAPTER 2: LIGHT AND SHADOW OF FARDAIN 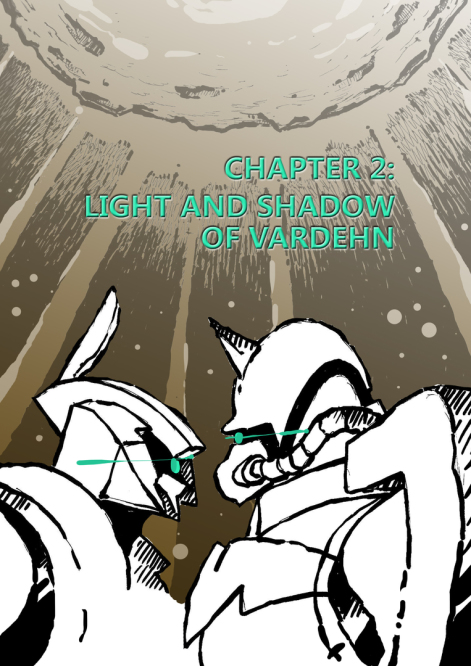 Everyone ends up on the SPACESHIP DIVA. YURIN thanks FLIT for his help and hands him her RIBBON before suddenly disappearing.

FLIT is then introduced to the DIVA and all it’s features. One of those is the fabulous AGE BUILDER that allows for various MOBILE SUIT UPGRADES to be manufactured. The young hero is also introduced to ULF, a white haired MOBILE SUIT PILOT who is quite full of himself. He challenges FLIT to a match that ends with a draw, due to the appearance of the U.E.

The DIVA’S CREW is now close to the first stop on it’s journey: COLONY VARDEHN. Before arriving there, LAGAN wants FLIT to undergo a special training session… 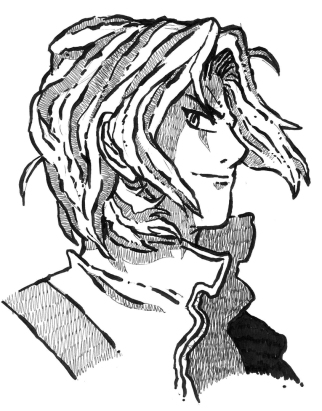 FLIT seems to be quite the natural talent. He is even able to stand his ground against LAGAN and ULF.

During the training, MIREYS catches a life sign coming from VARDEHN’S WASTELAND: It’s a little boy called DEZIL. FLIT makes sure he is OK and escorts him to the SPACE SHIP DIVA. 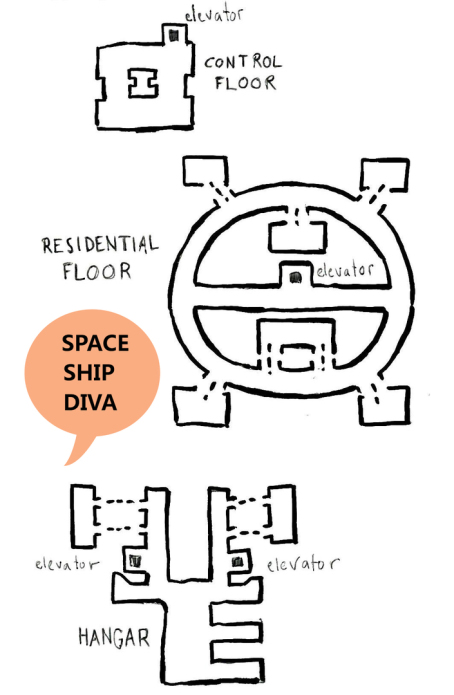 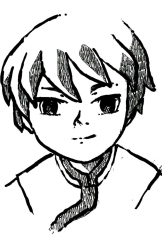 Not only does young DEZIL act very strange when asked about his family, he even goes so far as to steal FLIT’S AGE DEVICE. Sonn after the boy runs of insid the GUNDAM and FLIT has to make sure to bring him back in.

FLIT is surprised by DEZIL’S piloting skills. But in the end, he manages to get both the boy and GUNDAM back to the SPACE SHIP. The little red haired mischief 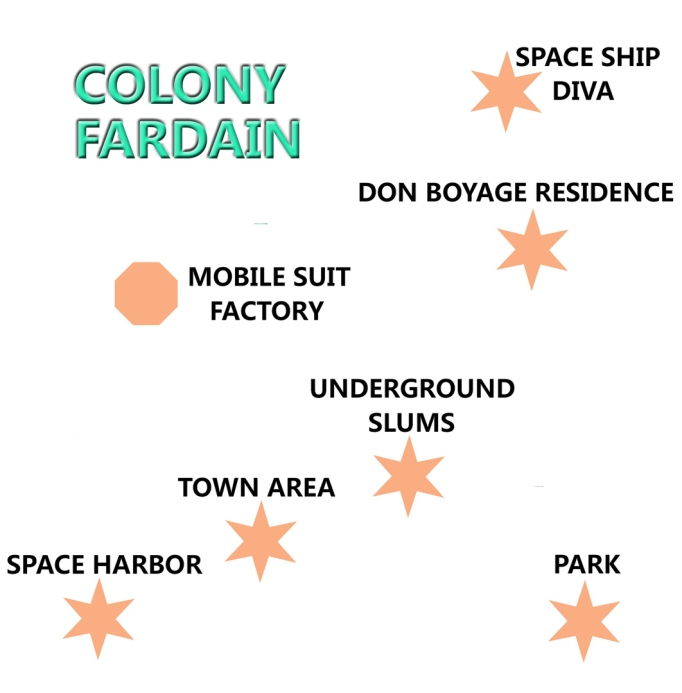 For the crew of the SPACE SHIP DIVA, VARDEHN is just one step on the way to their real goal: COLONY TORDIA.  TORDIA is the place where they want the citizens of NORA to emmigrate to.

When FLIT reveals to EMILY that he doesn't plan on staying in TORDIA, but instead wants to focus on defeating the U.E., his friend is very surprised. EMILY does understand FLIT'S wish to protect the universe from the threat of the U.E...

but the task is to dangerous. He could be hurt, or worse, die... EMILY can't stand the thought and runs away.

After a short conversation with DICK, FLIT is able to locate EMILY in VARDEHN'S TOWN AREA.

When they are drawn into a battle between two opposing fraction, ZARAM and EUBA, FLIT has to use GUNDAM to support the people of this COLONY'S SLUMS...

FLIT and IWARK work together to beat all the mobile suits in the different areas.

Afterwards, it's time to talk some sense into the leader of ZARAM. This senseless civil war has to stop! 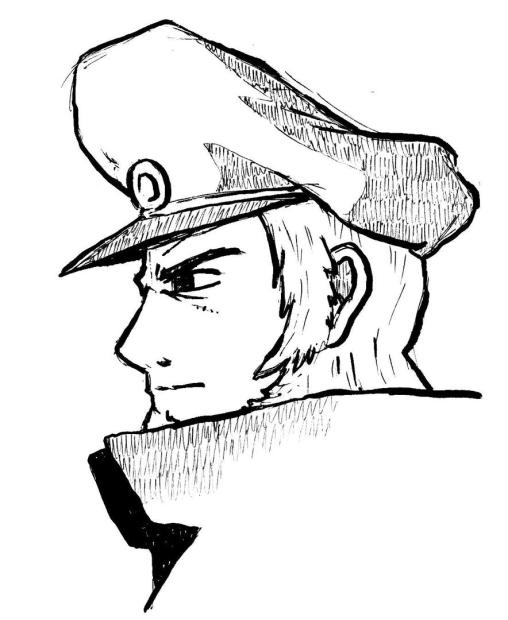 To bring an end to the conflict on VARDEHN, FLIT uses the ever evolving tech of his friend VARGAS. Through this, GUNDAM gains a new form called TITOS.

And when the U.E. are starting to envade the COLONY, ZARAM and EUBA begin to understand what the young hero is trying to tell them:

MISSION 07: STOP THE FIGHT BETWEEN ZARAM AND EUBA! 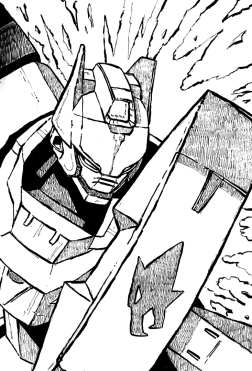 Even with the combined forces of GUNDAM TITOS, ZARAM and EUBA, the U.E. are too hard of a nut to crack. The tides turn when ULF enters the fray.

THE RIGHT THING TO DO  (SPACE SHIP DIVA)

Before the incoming forces of the U.E. can be driven out of VARDEHN, FLIT has a couple of things to learn:

First of all, ULF'S MOBILE SUIT is the work of a factory that goes by the name of MADORNA.

Second, an important name is dropped for the first time: JAQUE DOLE, a suspicious merchant whose deals might be of great importance to the events happening in this universe.

Also, CAPTAIN GRUDECK and FLIT share a past: GRUDECK'S family, just like FLIT'S, was killed 14 years ago during the attack called ANGEL'S FALL.

And lastly, the young hero learns that because of that past, GRUDECK, who has already found out the whereabouts of the U.E.'S stronghold, plans to prioritize the destruciton of the U.E. over his order to emigrate NORA'S inhabitants. More than anything he wishes to rid the COLONIES of the U.E.

Luckily, GRUDECK'S entire crew has his back. Together, they all decide to support VARDEHN in the coming battle. Afterwards, they are going to focus on the AMBAT STRONGHOLD. 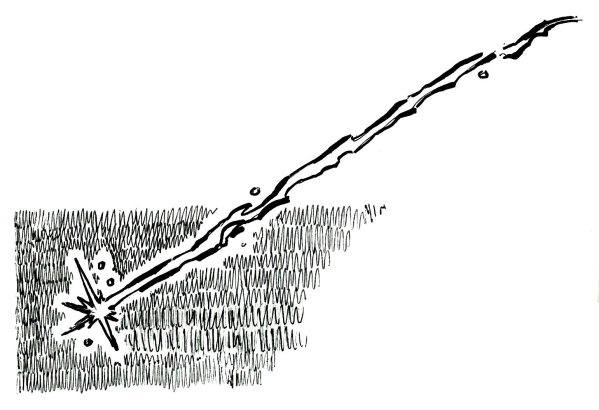 Peace between ZARAM and EUBA is secured. Now, the former rivals must work hand in hand to protect their home. During the fight, FLIT utilizes a new GUNDAM WARE: SPARROW.

With everyone doing their best, COLONY VARDEHN can be saved... for now.

Still mourning the loss of ZARAM'S lead DON BOYAGE, the crew heads of to COLONY MINSRY. It is there, that GRUDECK wants to complete the last preparations before heading of to the U.E. STRONGHOLD. And so the DIVA's journey continues…

FLIT, meanwhile, can't stop thinking about all the friends that they have lost.  Did he really make things better? Or... was awakening the GUNDAM a mistake? YURIN'S RIBBON in hand, he starts thinking about her. Will they ever meet again?

The answers to his questions are right around the corner.

But is FLIT really ready to face them?