DISCLAIMER: This guide is nothing more than a private way of studying japanese. It is no professional translation. None of the names are official. None of the maps are from any official source. Everything found here was transferred over from the game by me. I do not want to make any money out of it! It's just that - instead of looking at the notes in my bookshelf - I decided to share them. Simply to spread my love for video games and offer a little help to people who, like me, are trying to learn japanese to play great japanese games in their original language. 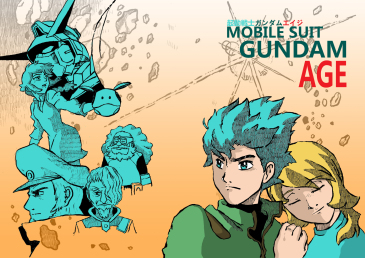 This game was a LEVEL-5 project that wasn't too well received. The 49 Anime episodes and a PSP game that was released in two different versions tell the exact same story:

Set in a different timeline than most GUNDAM shows, the plot evolves around FLIT ASUNO, his son as well as his grandson. Their world is caught in a conflict between the inhabitants of the various space colonies and the so-called U.E...

This guide focuses on the first part of the story only (FLIT ASUNO ARC)... It has a good amount of vocabulary that should be enough to get you through the rest of the game. Since there is also furigana AND a giant quest-marker, it''s pretty much impossible to get lost in this game. Battles are also very easy.

MOBILE SUIT GUNDAM AGE does have it's flaws. The game is too much like watching an anime, the anime a little too much like playing a game. Still, production value is great, and music as well as most of the story are a treat. If you are looking for something exciting to study without being challenged too much by gameplay, this game is worth your time.