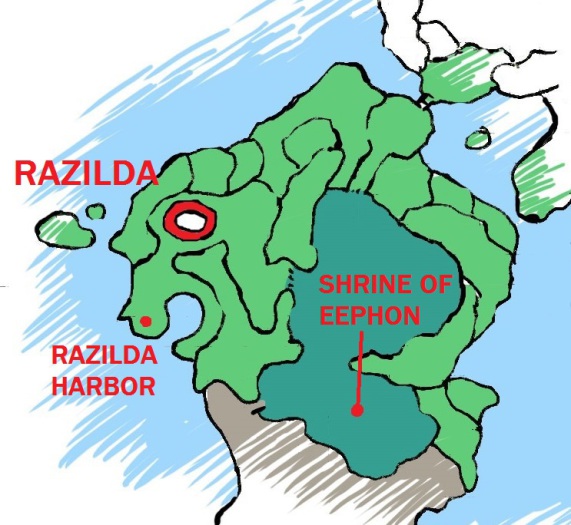 1. SULZ: after CLAIRE wakes up, head upstairs and hear about POPURA causing a commotion at the assembly hall
2. SULZ: head towards the assembly hall
3. leave SULZ together with ANNIE
4. rest at KEKETTO HOSTEL
5. head to PETNADJANKA – TYTREE will join the party once again
6. go to MESECHINA CAVE and visit the imprisoned EUGENE
7. take the boat at BALKA HARBOR to RAZILDA HARBOR
8. RAZILDA: talko to the the HUMA mayor of the village (building in southern part of village)
9. RAZILDA: outside, follow ZAPIE to the inn – you will meet HILDE there
10. RAZILDA: leave the village for a small scene.
11. RAZILDA: enter the inn and get the medicine for EUGENE
12. go back to MESECHINA CAVE and fight BOSS
13. MESECHINA CAVE: destroy the unstable wall and find two stone tablets
14. MESECHINA CAVE: examine the left one closer and tap on the strange crest.
15. return to RAZILDA and enter the inn for a scence
16. RAZILDA: examine the tapestry on the 1st floor of the inn

enter the japanese word for FLAG to advance: ハタ
22. RAZILDA: leave the inn and examine the flower cart in front of it
(PS2-VERSION: another password is needed to advance: キセツ)
23. RAZILDA: return to the woman in the central house and talk to the florist
24. go east from RAZILDA and cross the giant swamp until you reach the ZEREN WETLANDS SPRING
25. ZEREN WETLANDS SPRING: recite the poem correctly to enter (see page  74)
26. SHRINE OF EPHON: go through the dungeon to complete the trial
27. SHRINE OF EEPHON: defeat BOSS and get info on how to continue from here on
28. leave the shrine and head south towards PIPISTA

after the ritual, quite some time passes, before CLAIRE finally wakes up again.

she is back in SULZ and VEIGUE is right beside her. but CLAIRE still seems kinda confused. also, ZAPIE reacts really strange to her… they all might just need some time to get back on track.

VEIGUE gives CLAIRE a moment alone with her parents and goes upstairs. there, he hears unnerving news about an old friend: aunt POPURA is causing a commotion at the assembly hall…

when VEIGUE arrives at the scene, aunt POPORA is arguing with the HUMA inhabitants of SULZ, igniting a discussion about race. when VEIGUE tries to get her back to her senses, POPORA attacks him. luckily, ANNIE appears. with her powers she can cool of the angry GAJUMA’s head.

back at CLAIRE’s place, VEIGUE and ANNE talk. she has bad news: EUGENE has changed, talking just like POPURA did. and they are not the only ones.

to help EUGENE (or as she says: to help MAO), ANNIE is trying to geht the group back together. VEIGUE is impressed. that she, out of all people, would go to such length to help EUGENE…

even though he worries about leaving CLAIRE behind, VEIGUE agrees to come with ANNIE. however, soon after, CLAIRE will have followed up on them. at PETNADJANKA, TYTREE also joins the group once again. they all take the boat from BABILOGRAD to reach EUGENE’s and MAO’s location.

at MESECHINA CAVE, the group finds EUGENE who has imprisoned himself. he is changing more and more – and he’s afraid to hurt one of the HUMA – or worse: one of his friends. he asks VEIGUE to kill him, but since this is out of the question, the party decides to find another way to help their friend.

VEIGUE, TYTREE and ANNIE leave to get medicine for EUGENE. CLAIRE and MAO, meanwhile stay behind to watch after their GAJUMA-friend. but CLAIRE sneaks out of the place and travels to BALKA. in front of the castle she tries to get access, begging MILHAUST to let her in and listen to what she has to say… but to no avail…

at the village of RAZILDA, where HILDA is researching the rise of GEYORKIAS, with the help of one of the soldiers from BALKA PRISON, the party manages to get their hands on some medicine. back at MESECHINA CAVE, they have to bring down EUGENE, before they are finally able to cure him…

deep inside the cave, VEIGUE’s group discovers two strange stone monuments. the symbol depicted on one of them, leads them back to RAZILDA, where they investigate about the ancient POWER OF DARKNESS. that power seems to be connected to the SAINTS of legend who fought the DIVINE KING.

THE IMPRESSION: the party is able to get more information about the DIVINE BEAST KING and his fight against the SAINTS. when the king was sealed away, a phenomenon called “THE IMPRESSION” arose: GAJUMA turned more and more hostile which caused a great struggle between the races. just like what is happening right now…

after solving a puzzle that involves RAZILDA’s former flags, the party stands in front of the spring where the POWER OF DARKNESS is supposed to be sealed.

they recite the poem of RAZILDA’s founders:

within the darkness, we search for HOPE // 闇において、我は希望を求める

within the darkness, we find COURAGE // 闇において、我は勇気を得る

within the darkness, we reach the TRUTH // 闇において、我は真実に至る

within the darkness, we get to know LOVE // 闇において、我は愛を知る

inside the SHRINE OF EEPHON, TYTREE has several strange visions. as it turns out, the young man is tested by EEPHON – one of the SAINTS. TYTREE’s test involves his statement that all people, HUMA or GAJUMA, are the same.

at the heart of the shrine, the party learns that EPHON is also a DIVINE BEAST, just like GEYORKIAS. they also learn that there have been many names for those DIVINE BEASTS - “SAINTS” or “POWERS OF DARKNESS” are just two of them.

before the trial can be completed, the party has to face EEPHON directly, and the battle is a tough one:

EEPHON guides them towards the southern desert and as soon as the party leaves the shrine, they march towards the city that is located there: PIPISTA.

however, on the road a heated discussion arises: HILDA does not want to understand why EEPHON chose to grant TYTREE his power. she envies the young man and claims that none of the group would understand the reason she’s upset…