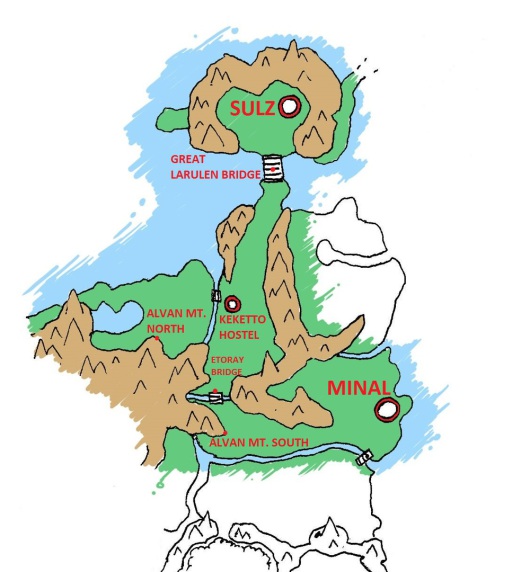 1. SULZ: follow CLAIRE to her house and have a meal with MAO and EUGENE
2. SULZ: go towards the assembly hall
3. after the events infront of the assembly hall, leave SULZ
4. cross the GREAT LARULEN BRIDGE - beware! the DARK WINGS appear!
4. take a break at KEKETTO HOSTEL
5. KEKETTO HOSTEL: during the attack at night, use the clock to get the attackers back to their senses
6. KEKETTO HOSTEL: talk to WALTU
7. continue the journey to MINAL by going south
8. reach ETORAY BRIDGE and meet the DARK WINGS again
9. since the bridge is destroyed, head westwards towards the ALVAN MOUNTAINS
10. cross the ALVAN MOUNTAINS.

1 year ago, LADRAS, the king of CALLEGEA, performed a strange ritual, offering up all his FORCE and dying in the process. this day came to be known as the DUSK OF LADRAS.

on that same day, a mysterious power awakened within the young man VEIGUE. a power he could not control. in a terrible accident he trapped his friend CLAIRE inside a giant ice pillar... 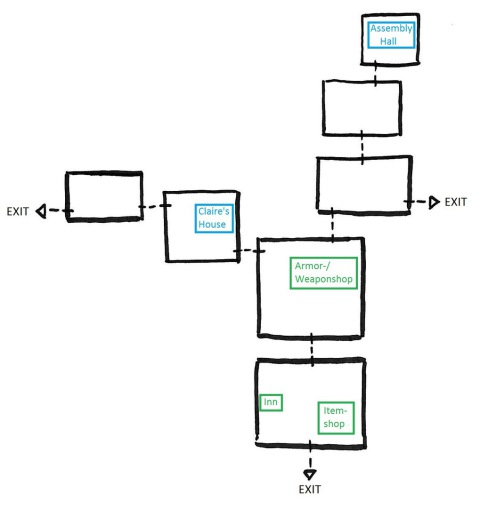 just as everyday, VEIGUE is sitting at the assembly hall, watching after CLAIRE. he has been trying to free her for one year now, without success. suddenly two strangers appear: a GAJUMA named EUGENE and a young boy called MAO. they tell VEIGUE more about his power that is called FORCE and offer their help as well es asking for his.

after freeing CLAIRE, the small group wants to have a meal at her place but is attacked by a strange bird. it's called a VIRUS and apparently those have started to increase in numbers since a certain day one year ago. after defeating the enemy, MAO, EUGENE and VEIGUE decide to head to CLAIRE's house.

there are two races in the kingdom of CALLEGEA: the HUMA and the GAJUMA, with the first being your standard humans, while the second are beast-people with a strong connection to the power of FORCE.

VEIGUE learns more about the FORCE, how different people command different elements, how originally only the GAJUMA-race was able to use this power, and how that changed during the DUSK OF LADRAS.

MAO and EUGENE want VEIGUE to go with them on a journey to find new FORCE-users and unravel the mysteries behind that fateful day. there are a lot of things going on in the kingdom of CALLEGEA and they seem to be connected to the new queen...

after the kings death, his daugther AGARTE became queen of CALLEGEA.
her personal army is called the ROYAL SHIELD; and many of it’s members are strong FORCE-users. the strongest of them are THE FOUR STARS.

their job is to find and bring in FORCE users as well as other special opperations. THOMA and SALEH are two of these FOUR STARS.

with VEIGUE still being unsure if he can accompany MAI and EUGENE, the conversation is interrupted.

a group of soldiers attacks the village, and their two leaders, THOMA and SALEH, take CLAIRE with them after a short battle and a little dispute.

it turns out they know VEIGUE’s two new friends. EUGENE himself was once the general of the ROYAL SHIELD and MAO his retainer. 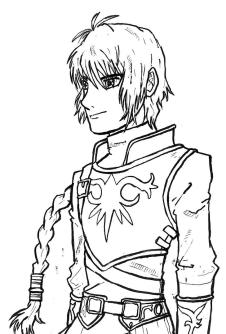 during the DUSK OF LADRAS, MAO lost his memory. only in dreams can he remember his life from before...

now VEIGUE doesn't have to make the decision wether he will go on this journey or not... together with EUGENE, MAO and his pet ZAPIE, he chases after the army. believing that the enemy's first destination has to be the harbor town MINAL, the group travels south.

after a little encounter with the DARK WINGS at the GREAT LARULEN BRIDGE, the party decides to rest at…

during the night, they are attacked by a small group that seems to be under the influence of some strange sound.

VEIGUE uses the hostel's clock to snap them out of it. immediately afterwards, WALTU, the FORCE-user of sound, wants to have a chat. he is one of the FOUR STARS and begs EUGENE to return to THE ROYAL SHIELD.

although he is one of the enemies, he ensures VEIGUE that CLAIRE is safe, along with the other girls the queen has ordered her army to capture.

since CLAIRE is his main concern, VEIGUE does not go into detail about the things WALTU said during the encounter at KEKETTO HOSTEL. still, what sin did EUGENE commit...?

the party encounters the DARK WINGS again and is forced to make a detour. with the ETORAY BRIDGE destroyed, their only way of reaching MINAL is through the ALVAN MOUNTAINS. 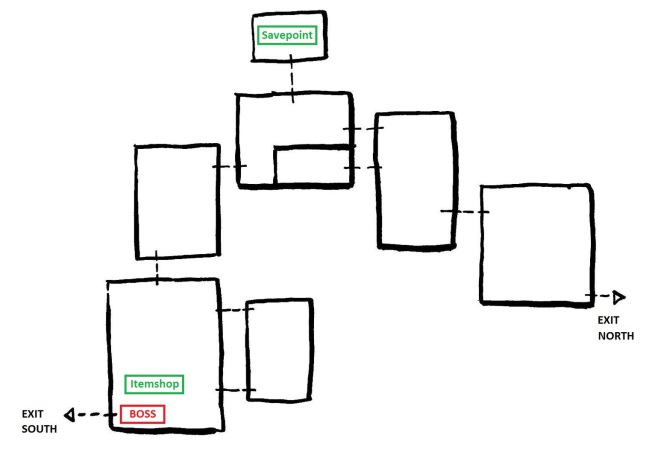 with the help of VEIGUE's FORCE, the party begins to cross the ALVAN MOUNTAINS. during that trip, VEIGUE shows his new companions a pretty stone that CLAIRE once gave him for his birthday. he is so eager to save her that he forgets to rest. also, saving CLAIRE does mean more than just finding her. the party has to get stronger and the queen's plans have to be uncovered.

after taking a little nap at a cottage, the journey through the mountain continues; and it's a hard one. a lot of VIRUSES roam the area and it is only due to MAO's powers that the party can get past the huge chunks of ice that block the way. finally, they reach the southern end of the mountains, only to be attacked by a strong monster: 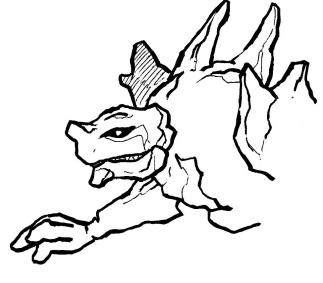 the VIRUS can hit hard, but as long as you always switch to defending right after every attack-chain, you should be fine.

having left the mountain path, the party can almost see MINAL. the city lies to the east of their current location and they head there as fast as possible. unfortunately, they soon run into another problem. while on the road, heavy rain starts to fall...