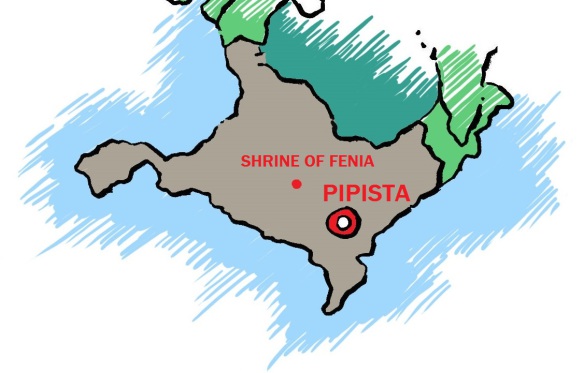 1. go to PIPISTA
2. PIPISTA: talk to the villagers in front of the chieftains house
3. PIPISTA: visit the chieftain and talk about HACK
4. PIPISTA: go to the house near the village's entrance and talk to the GAJUMA who guards HACK (change to EUGENE with "X + L")
5. PIPISTA: talk to HACK about the legendary sleeping bird
6. PIPISTA: talk to the man in the house with an ostrich right in front of it.
7. PIPISTA: get the egg from the ostrich
8. PIPISTA: at the inn, talk to the food vendor and examine the food stall next to him afterwards
9. PIPISTA: return to the chieftain and choose the second option
10. PIPISTA: everyone will head to the sacred altar and try to reveal the sleeping bird
11. PIPISTA: return to HACK and have him released
12. return to the altar and talk to HACK - he will hint towards the wasteland north-west of town
13. activate three of the HOLDERS OF FLAME with MAO's power - look for the image of a bird in the sand:
- activate the HEART of the bird
- activate the left tip of the WING
- activate the right tip of the WING
14. a huge tower will appear - the SHRINE OF FENIA
15. climb the tower and talk with FENIA at the end
16. with the trial completed, head back to PIPISTA and talk to the chieftain
17. PIPISTA: HACK has gone to RAZILDA – follow him there
18. RAZILDA: follow the escaping HACK talk to the angry villager on the way
19. RAZILDA: talk to the GAJUMA mayor in the north of the village (use EUGENE!)
20. RAZILDA: talk to IGOR in front of the inn
21. return to the shrine of EEPHON and go deeper in, until you meet IGA and later HACK
22. return to RAZILDA
23. RAZILDA: head to the western area of the village where the crowd is fighting
24. RAZILDA: go to the inn and enter the vacant room on the 1st floor
25. head north and cross the GREAT POKUNAN BRIDGE, soon after you will reach KYOGEN

EEPHON’s hint was an ancient poem about a sleeping bird. when the party arrives in the southern village PIPISTA, they immediately spot a bird-statue at the entrance. seems as if they’re on the right track.

PIPISTA is a small village, carved in the stones of the canyon. it’s inhabited by GAJUMA only; and those aren’t fond of HUMA at all. the meet HACK again, who visited the area after finding some clues about a sleeping bird in MESECHINA CAVE. the sacred altar of PIPISTA holds the key to reviving this bird.

unfortunately, HACK can’t support the party too much. he himself is in trouble. for sneeking around at the altar, the villagers of PIPISTA imprisoned the poor guy. VEIGUE and his friends try to find out more about the altar and the bird. one villager tells of a RED ORB OF LIFE that seems to be of importance. with it, the altar could be ignited.

eventually, the mystery of the sleeping bird can be solved and the location of the second DIVINE BEAST appears...

it's a giant tower in the middle of the wasteland surrounding PIPISTA: the shrine of FENIA.

inside it becomes clear that this time MAO is the one who is tested. he experiences visions of his past. his confunsion about his identity, his first encounter with EUGENE... and even a vision from his life before all this...

in the end, MAO is able to find out the truth about his lost memory: he didn’t have one to begin with. MAO is an entity created by the DIVINE BEASTS to examine the people of this world. all of this FENIA tells the young man in secret. and he decides to keep the information to himself… for now.

once again, HILDA is desperate to become stronger, as well. she begs FENIA to grant her power… and gets furious when her wish can’t be fulfilled…

after the events at the shrine, the party returns to PIPISTA. in order to find HACK who has already left the village, they head back to RAZILDA. there, the situation between the two races escalates. the party then encounters MILHAUST again, who is trying to calm down the crowd. his orders come from SILVA – and they include taking SALEH and THOMA with him…

when VEIGUE and his group meet HACK again, they discuss FENIA’s hint towards the next DIVINE BEAST.

meanwhile, AGARTE wakes up on the beach near RAZILDA. it slowly becomes clear what is going on with her and CLAIRE… but it’s still a little while until VEIGUE and his friends will learn the whole truth…