DISCLAIMER: this guide is nothing more than a private way of studying japanese. it is no professional translation. none of the names are official. none of the maps are from any official source. everything found here was transferred over from the game by me. i do not want to make any money out of it! it's just that, instead of looking at the book in my bookshelf, i decided to share it. simply to spread my love for the TALES OF SERIES and offer a little help to people who, like me, are trying to learn japanese to play gems like this game in their original language. 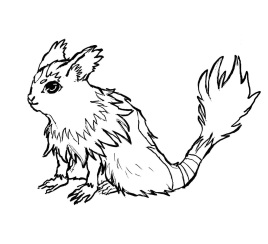 TALES OF GAMES are often quite hard to understand. the games tend to have a very unique terminology. the older ones also lack any kind of quest-marker. since there is a lot of character interaction, a lot of display of emotion, you do often get a certain idea about the story. but to understand it's details is very hard.

TALES OF REBIRTH, to make matters worth, has a couple of word-based puzzles...whithout knowing japanese they are impossible to solve on your own.

here are some of the gameplay-aspects influenced by the language-barrier:

luckily, there is always one skit that stays on screen: the one that tells you where to go next. this helps in case you couldn't get the necessary information from the regular converstations. however, if you don't understand the skit, you're left with trial and error - which of course keeps getting harder, the further you get into the game.

while the battlesystem looks like button mashing, there are tons of strategies involved. you can ignore some of them on NORMAL difficulty, but it also takes away some of the fun.

menus are a mixed bag. while figuring out the best equipment is easy, skills and upgrading and everything else is chock full of kanji.

GAJUMA, FORCE, HUMA, DAY OF LADRAS, ... you gotta be fit to understand everything that is going on. while the overall plot is actually not that complex, the details that make it shine can be quite confusing. TALES OF REBIRTH has, like most TALES OF GAMES, some tough themes to deliver.

on the internet you can find some fantastic quides for the story, as well as the pure gameplay. what i always thought was hard to come by is a guide with a basic summary of the plot AND all necessary steps through the game. that's kind of what i'm trying to do with this guide.

plus, of course, vocabulary :)