CHAPTER 7: THE ESSENCE OF STRENGTH

1. cross the inner ocean and travel through the BANDERFON REGION until you arrive in GROTTA
2. in GROTTA, go to the coliseum and enter the contest
3. before the contest starts, head to the inn and get some rest
4. finish ROUND 1
5. go to the orphanage to meet HUMPHREY
6. go back to the inn
7. finish the rest of the contest
8. during the night, head to the orphanage
9. enter the GROTTA UNDERGROUND and beat the BOSS at the end
10. back at the tournament, receive the message from MARTINA and ROU

now, the group can finally continue their search for the merchant who bought the branch. SILVIA's first mate ALICE heard a rumor that such a merchant was seen travelling towards the region of BANDERFON, north-east of their current location. so the party crosses the inner sea until they reach BANDERFON's shores. soon after, they learn more about this area, when they stand in front of BANDERFON’s remains. the famous kingdom of flowers has been destroyed many years ago. without a clue where to go next, TORTE and his friends try to get advice at a nearby hostel that is called NELSON’S LODGE. the locals point them in the direction of GROTTA, a giant city north of BANDERFON.

they soon arrive at this unusual place. GROTTA is a city inside a giant fortress. it houses a coliseum as well as a huge statue of the local hero: general GREIG.

apparently, some time ago, he rid the area of monsters and saved many people.

the group soon finds out that the sacred branch they are searching for, is one of the tournament’s prizes.

so TORTE, KAMYU and SILVA enter the competition. the event begins that same day with a random selection of partners. only it isn't completely random. one exception is made for a very special team:

a young woman named MARTINA and an old man who is called ROU.

TORTE's partner, meanwhile, is the previous champion and GROTTA's most important celebrity: HUMPHREY.

after a good night's sleep at the inn, the first battles take place:

after the battle, TORTE and HUMPHREY watch some of the other fights. it is then, that they witness the impressive strength of MARTINA and her partner ROU.

outside of the coliseum, the duo appears again. while they walk past the party, MARTINA whispers something strange into TORTE's ear:

"watch out for HUMPHREY."

what's that supposed to mean? TORTE decides to learn more about his partner and walks through town until reaching an orphanage. this is HUMPHREY's home.

the hero is deeply touched by his partner's attachment to this place. HUMPHREY really cares a great deal about the children and their safety. but the peaceful scene is disrupted by a loud sound, coming from HUMPHREY's room.

a thief has broken into the place and HUMPHREY is very upset about it. time to call it a day.

TORTE returns to the inn, in order to get some sleep. the coming day is going to be a hard one.

next up is SILVIA with his quirky companion. right before the battle begins, TORTE notices his partner HUMPHREY taking a sip from a mysterious bottle...

now it's time for the final round. HUMPHREY takes another sip from his bottle and the battle against MARTINA and ROU begins...

just before HUMPHREY and TORTE are able to finish off the opponents, MARTINA and ROU notice the hero's birthmark and seem quite shocked by the sight of it...

they are then defeated and, soon after, disappear from the scene. TORTE and his partner have won the tournament! but one look at HUMPHREY – and it is clear that something is not right. the young man collapses and everyone returns to the inn to get some rest.

during the night, ROU appears. he tells the party that MARTINA is missing and leads the hero’s group to the orphanage. there, they find a secret passage in the basement. the group heads inside to search for MARTINA and HUMPHREY.

deep inside the GROTTA UNDERGROUND, the truth is revealed:

many years ago, when general GREIG fougth all those monsters living in GROTTA, there were a couple of survivors among the beasts. those survivors have all gathered in the UNDERGROUND of GROTTA. by stealing the essence of the strong warriors that participate in the tournament, they try to get back on their feet.

as the leader of the monsters explains: when monsters drink the essence, harvested from strong people, their wounds heal.

when people drink it, they become invincible.

a long time ago, HUMPHREY made a deal with the monsters to make sure he could win the tournament year after year. the prize money ensures that there's enough food for the children at the orphanage. protecting those boys and girls is more important to him than anything else...

for TORTE and his friends, however, HUMPHREY isn't the priority right now. the tournament contestants must be saved - and the leader of the monsters, the great ARACHRATOR, obviously doesn’t want that to happen. 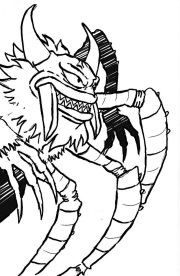 with the giant spider defeated, HUMPHREY begins to resent his actions. old man ROU decides that he will keep quiet about the young man's scheming, in order to protect the orphanage's reputation.

the next day... GROTTA's tournament wraps up with the celebration of it’s winners… HUMPHREY challenges TORTE to a small battle, showing everyone in the audience that he isn't their great champion after all. but his fans still got his back.

...which causes HUMPHREY take off in shame…

when it's time for TORTE to receive his prize, everyone is shocked to hear, that the sacred branch has been stolen… seriously?!

the only clue is a letter from MARTINA and ROU, telling the group to follow them to the YUGUNOA CASTLE RUINS.